Leaving home in the UK to move to France

Just to prove I do listen to my kind readers and respond to their requests, here, especially for Carl, are some of the pictures of my “grottage” near Market Rasen, Lincolnshire.  Affectionately known as “The Hammer House of Horrors” when I bought it because it was in such an appalling state, having been largely lived in by animals for years.

As ever, photographs are accompanied by relevant text from my book, Sell the Pig, for the benefit of those who have not read it and to link things together for those who have.

“I wasn’t particularly thinking of buying a property at this stage in my life, and certainly was not certain that that area was where I wanted to put down long-term roots, having been there barely six months. But, like the Elephant’s Child, I am full of “’satiable curtiosity”.
“So when a neighbour told me horror stories of a cottage in the hamlet that was coming up for sale, I simply had to go and take a look at it. She told me it had been repossessed by the mortgage company when the former occupant, who apparently had some mental health issues, fell behind with payments and became unable to live there on her own any more.
“According to my source, the house was in very poor condition, as she’d kept all of her animals indoors for years – and I do mean all. Apparently the menagerie included dogs, cats, chickens and goats.” 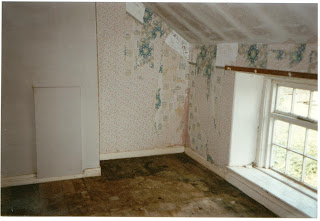 Main bedroom
“It’s hard to say which of our senses was assaulted first. The smell was indescribable. But my eye was immediately drawn to the tell-tale dark brown stains all over the floors and the door frames, wherever we looked.
“Before we’d even stepped over the threshold Mother was already saying “No, oh no.” But Auntie, who was surprisingly intrepid, was bumbling about peeping into rooms and cupboards and following me up the stairs and round the bedrooms – very brave, as parts of the upstairs floor boards had been rotted away with presumably several years’ accumulation of animal urine.” 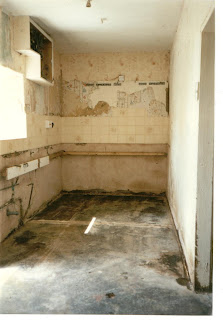 First impressions on entering – the “kitchen”
….”I loved my cottage, now promoted from grottage, with a lovely garden, all created by my own hands. My predecessor there obviously had some very serious issues as, once I started digging in the mass of nettles and runaway lonicera nitida which was all there was of a garden, all I came up with was endless pairs of tights inside Walkers’ crisp packets.
“Not sure which flavour. The blue bags. I only like the plain ones so I don’t know the colours of the different flavours. But whatever the former resident had been trying to achieve, I can tell you that no matter what soil you plant that combination in, it simply doesn’t grow into anything.” 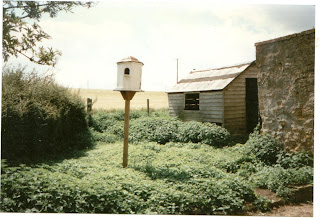 The garden, as I saw it first
That’s your lot for today, but I promise to show you some of the “after” photographs, after the promotion from grottage to cottage.  Do please leave me your comments and as ever, this blog is driven by you.  What yea ask for shall be given unto thee, or something like that.
Share
Tweet
Share