Moving to France – why the Auvergne?

Faithful readers of Sell the Pig will already know that my decision to move to France’s Auvergne had a lot to do with a certain drinks advert.Back in the 1970s, Dubonnet was advertised with a slogan of, I think,  “Way up there” to the sound of the achingly beautiful shepherd’s song Bailero from Canteloube’s Songs of the Auvergne. This link is far from being the best ever version of the song but it does have the advantage of showing you some of the stunning scenery of this very green region with its hopefully extinct volcanoes.

Having listened to the music, I’d long held a desire to visit the region and as soon as I did, it captured my heart. So I was amused on a recent guided walk round a little local town, Cunlhat, (and if you think it looks hard to pronounce, I can tell you the locals pronounce it nothing like it looks!) to come across this painted gable end, advertising Dubonnet! 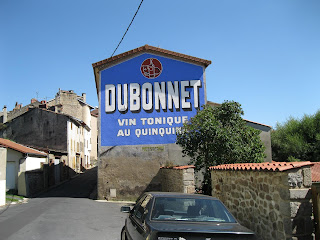 It’s rather ironic, as when I first began work as a cub reporter in Manchester, my editor was nicknamed Pissquick – you can guess why – and his wife was an alcoholic, whose favourite tipple was Dubonnet.

But that’s another story – perhaps for the sequel to Sell the Pig!